We curated 12 albums for December 2019 but Pandemic reared its head and the rest was history.  We left this page up as reference.  See you March 2023!  Go here for details. 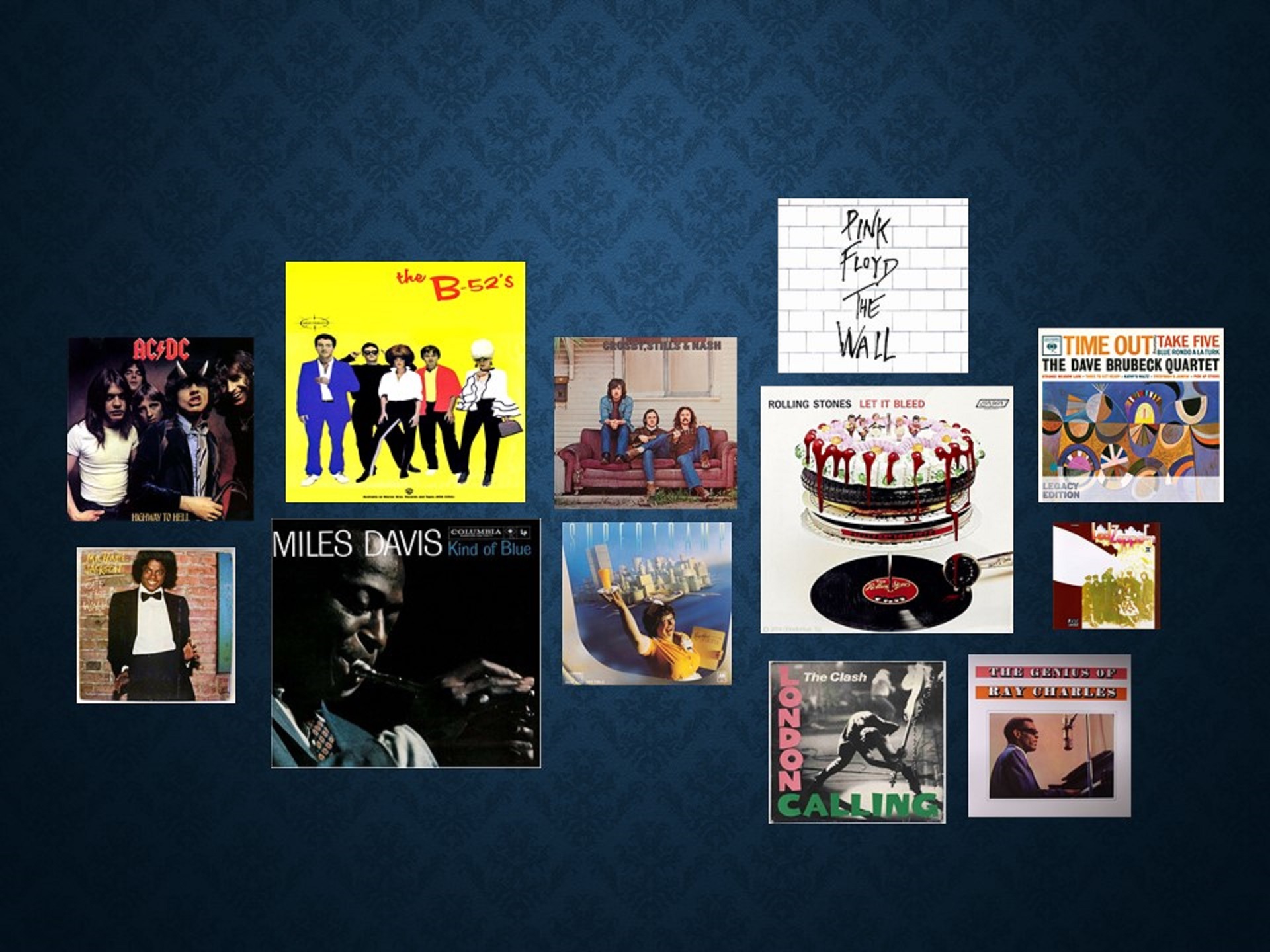 If you need a pick up in the morning, looking for a tune to put a smile on your face, look no further than Blue Rondo à la Turk; features a catchy saxophone hook and a primal drum solo. But every instrumental on the album is fresh, innovative and cool even after sixty years. Here’s the appeal: all the songs were written and performed in 5/4 time, hence the pun in the title “Take Five.” Dave Brubeck drives the music & the band from his piano. Memorable songs, superb musicianship, well-recorded; this is a masterpiece. Even if you don’t listen to jazz, do yourself a favor & purchase this, it is an essential addition to any serious music lover’s collection.

Clearly not a modest title, but RC’s genius was beyond reproach. With the help of musicians from Count Basie & Duke Ellington’s orchestras, Ray Charles lets rip on this album, not holding back. Blending the blues, gospel, soul & jazz into a fabulous confection, while a little dated in places, its still a healthy meal for the music lover who enjoys strong songs with deft arrangements by Quincy Jones and produced by Jerry Wexler & Ertegun (Atlantic). The observant music lover will notice many of Ray Charles’ sings here have entered the American Songbook: It Had To Be You, When Your Lover Has Gone, Come Rain or Come Shine. A well-recorded meal worth sharing.

Hard to believe that this jazz masterpiece is 60 years old now, it still sounds fresh and vibrant. The definition of COOL. With Cannonball Adderley on alto saxophone and Bill Evans on piano, how could he go wrong? Strong compositions, well-recorded- this album is a gem in our cultural heritage.

It seems incredible that the same year that the Beatles Abbey Road was released, that Led Zeppelin 2 also was being enjoyed at the same time.

The album starts with a barnstormer; Whole Lotta Love. A complete take no prisoners fanfare, that was widely received to high acclaim, even though there were no singles released on the radio at the time, the album sold well and accumulated a wider audience as the decades rolled by. Listen to the Bob Ludwig “hot press” on vinyl – stunning, though it is overall sonically challenged. Nonetheless a lot of fun to listen to loud.

Listening to Crosby, Stills and Nash, I am still gobsmacked by the beautiful melodies, superb harmonies and the realization that what sounded perfect 50 years ago, still sounds perfect today. Its a delight to hear the sheer joy these three achieved from singing together. A beautiful natural recording, tastefully produced by the band themselves.

Back in 1969 music lovers were firmly planted in either one of two Brit-pop camps – The Beatles or The Rolling Stones. Let It Bleed is considered by many as valid a masterpiece as Abbey Road. While a lot more blues-based than the Beatles, though not as hard-edged as Led Zeppelin. Check out Midnight Rambler and You Can’t Always Get What You Want. Sonically challenged.

Interesting how hard rock supplanted progressive rock after the demise of Punk. Here is a great example of American hard rock at its finest. The title track is a major staple in all AC/DC Concerts. Though you should probably check out their 1980 album also – Back in Black.

When I first heard Planet Claire from the B-52s I was living in south Sudan, I was delighted to hear such original and fresh music. Here was a new original voice, it was an instant party on a cassette. Rock Lobster Will change your mood with its infectious organ groove and leave you with your feet tapping and a smile wrapped across your face. Infectious.

The B-52s never took themselves as seriously as Talking Heads, both bands have enriched our lives equally.

“London calling to the faraway towns,

Now that war is declared–And battle come down.”

The Clash played hard and raw. Lyrics were tough, political and had a rough edge that worked well. This is their best album and one of the hardest classic rock and punk works of the past four decades.

Coming as they did from the Punk movement, The Clash blended many musical genres into this powerhouse of a double album. Surprisingly well recorded. Sonically challenged.

Michael Jackson – Off the Wall

While this was not Michael Jackson’s debut solo album, it was his breakthrough, the album that established him as an artist of astonishing talent, coupled with the terrific arrangement talents of Quincy Jones and Jerry Wexler & Ertegun (Atlantic) as producers. A visionary album, a record that opened disco wide into a new world where the beat was undeniable, but beautifully blended into a rich tapestry of lush ballads, silky soul, pop, soft rock, and glittering funk.

A major concept album from one of England’s premier progressive rock bands. A sprawling affair with 26 songs, told the story of the rise & fall of a rock star, named Pink Floyd. Based on Roger Waters own life experience, and produced by Bob Ezrin. It was the last album that Roger Waters and Dave Gilmore worked together on as equal partners.

More infectious pop from the UK, at a time when the English Music Wave was well received across North America. Very high production values, infectious songs. Well worth visiting again and if you are not familiar, then you are in for a treat.

1.  Our informal music reviewer panel will take the top 3 albums that have the highest votes and decide on the final selection.

2.  Please understand we are only one part of the ecosystem for the distribution and enjoyment of music.  We need the help and collaboration of other constituents, including the music labels and the printing press.  Practically, sometimes we may not be able to execute as smoothly as in Abbey Road and may have to skip or change the album if we run into logistics snags.